Chris Queen found her calling helping vulnerable animals, now as a dedicated foster at San Diego Humane Society. Through rainy days spent caring for community cats and long nights fostering mother cats and their kittens, she has changed countless lives with her dedication. In our Animal People interview, Chris told us how she’s been inspired to make a difference for animals, even when times are tough. 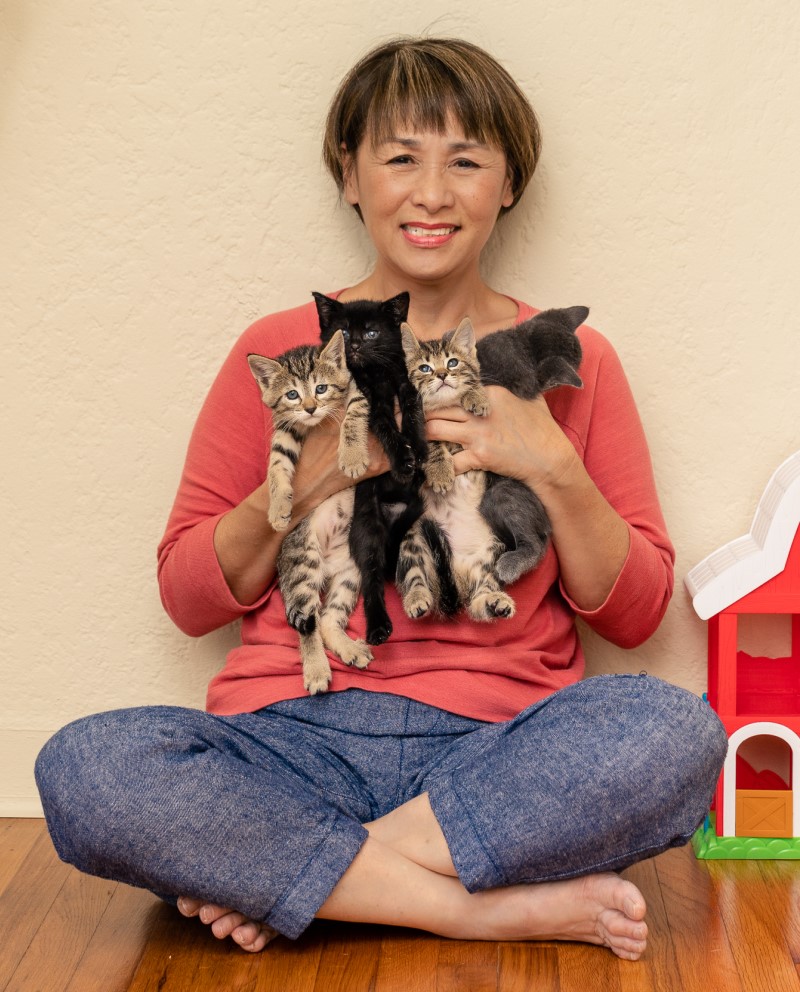 My cat Sunny’s mama, Luna. Because of her, I learned about TNR [Trap Neuter Return] and how it makes a positive and humane impact on free-roaming community cats. Every day, no matter if it was rain or shine, my dog Claire and I would go feed Luna and Sunny before I went to work and then again in the evenings.

Luna and Sunny would wait for us at the same spot every day, and, while Sunny played with Claire, I cleaned their hidden feeding station down a steep slope near a creek. Luna would happily sit on my lap while her only surviving baby played nearby.

Once they were fed, I’d take Claire for walks along the creek, with Luna and Sunny trailing behind. There were numerous times that walkers would tell me, “There are two feral cats following you and your dog,” to which I smiled. It was because of Luna that I began to TNR nonstop for the next eight years.

During these years, I managed 14 community cat colonies, using TNR to maintain good community relations. I also began doing cat rescue work where the local shelters and rescues would ask me to go out into the communities to assess and bring in cats and kittens in need.

What prompted you to start fostering?

During my eight years of TNR, I began fostering feral mom cats with babies when local shelters did not have space for them. All of these mom cats were trapped by me and the shelter discovered they were lactating at time of spay. Once I picked them up from the shelter, I went back out to look for their babies and fostered them with moms until the babies were weaned. Then I released moms back to their outdoor homes.

Luckily, because I was a volunteer for the Humane Society of Silicon Valley, the weaned kittens were able to go to the shelter for adoption. It wasn’t until I started fostering for SDHS that I got to foster friendly mom cats! What a hugely different foster experience! 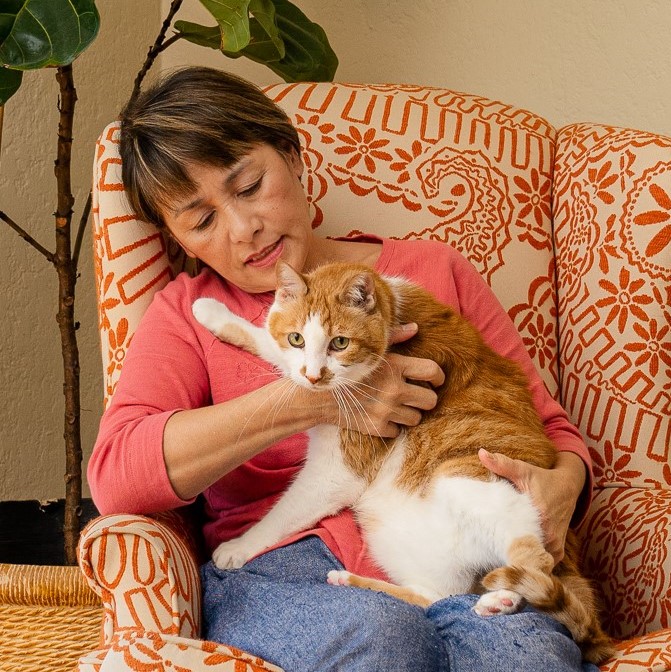 Through your many years fostering, is there a case that stands out in your mind?

I had an adult foster cat, Penny, who came to me through a fellow trapper friend. Penny and her five siblings lost their owner and home to a fire and overnight found themselves homeless, living in a raspberry shrub behind what was formerly their home. My friend found out about the fire and the displaced cats through the local news, and began feeding them while trying to figure out what to do with them. A few months after the fire, the property was sold and the process of clearing the entire property for a rebuild began. My trapper friend reached out to me asking if I would take Penny while she frantically tried to place her four siblings.

I had never seen such a traumatized cat until Penny. She was in a complete shutdown and spent days cowering in the corner of her completely covered crate, face to the wall. Over a period of two months, she began to relax and realized that she was safe and LOVED. I integrated her with my then three cats, all of whom accepted her without hesitation. She slept with my cats and me every night. While I was becoming attached to her, in my heart, I knew she deserved to have her own humans and home. I wrote a “letter of the heart” on behalf of Penny and submitted it to the intake team at the Humane Society of Silicon Valley. They took her in and put her up for adoption.

It only took a few days for Penny to find a loving home with a wife whose husband was a cross-country truck driver. When I took Penny to the shelter, I felt as though I had surrendered my own cat. I felt that I had betrayed her because she finally let go of her fear and allowed love back into her heart. But I also knew that it was the most selfless gift that I could ultimately give Penny — her own home and her own person. I still feel emotional when I think of Penny. 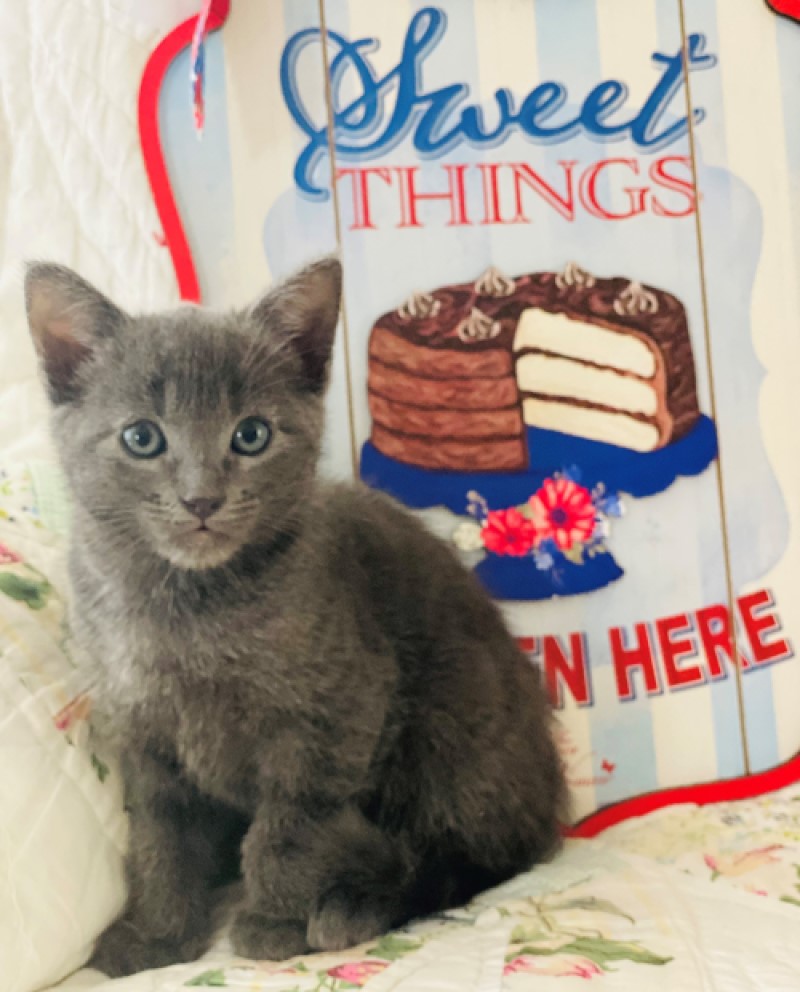 You pour your heart, time and energy into helping so many animals. What have animals brought back to your life?

All of the animals I have had in my adult life came when I was going through a very dark time in my marriage. They provided me with a reason for being. In turn, they gave me so much love and comfort and gave meaning to my life. I felt that I was doing some good in the world for living beings who couldn’t yet speak for themselves and were completely helpless. My pets and fosters are still the reason for my being and give deep meaning to my life, as well as shape who I am.

I believe my passion for animals is not unique or different than anyone else’s. I do it because I want to make a difference and I know that we can if we each do our part! Someone close to me used to tell me that if I TNR one more cat or foster one more litter of kittens, it won’t change the world and its never-ending overpopulation problem. I don’t intend to change the world and its never-ending problems. What matters is that I help that one cat and that one litter.

For families looking for a more permanent furry friend, why would you tell them to adopt?

We save an animal, which brings a lifetime of joy to us and our families, and open up shelter space for another animal in need. 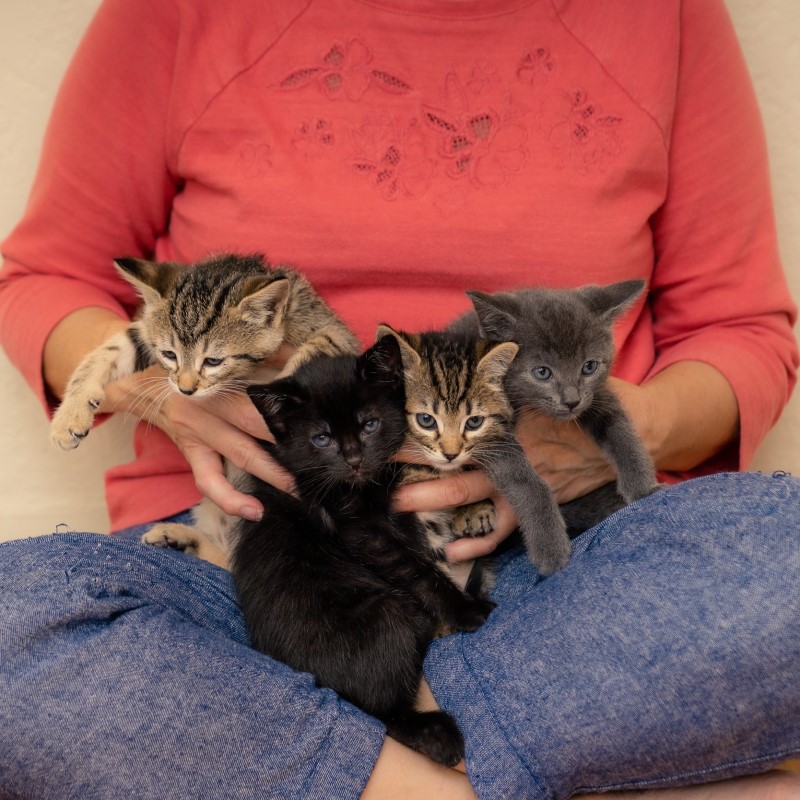 A big thank you for fostering your current mama, Nairobi, and her SEVEN kittens! That’s a large bunch! With your home always full of fosters, do you also have pets of your own?

I currently have three cats — Sunny, Ziggy and Phoebe — and one dog, Mac. Sunny is 10 years old and was my very first feral kitten. I officially adopted him in early 2012 when he came down with pneumonia during the big El Niño storm the Bay Area experienced that winter. For the next seven years, Sunny lived as an outdoor kitty and came inside the garage only at night. When we moved back to San Diego in late 2017, I took this opportunity and converted this loving cat into an indoor-only cat so I no longer have to worry about his well-being. I used to have many sleepless nights when he did not come home and I had no idea where he was.

Ziggy is 6 and is my very first and thus far only foster success! Our 17-year-old kitty had recently passed away when I fostered Ziggy as a lone orphan kitten. I dutifully took him back to the shelter when he was ready for adoption and, for next three days, called the adoption manager inquiring about him. On the third day, as soon as the adoption manager picked up the phone, she said, “I have put Ziggy on hold for you. When would you like to come in for the adoption?”

Phoebe is also 6 and was a lone orphan. We had lost another kitty to cancer, thus, our hearts and home were opened to this wild girl at heart. To this date, Phoebe remains aloof and only seeks love from Sunny and Ziggy. They in turn love her with a passion!

Mac is my 18-month-old pup I adopted from the Humane Society of Silicon Valley just two months before COVID-19 happened. I had lost my dog Claire to cancer the year before. He is my COVID buddy and he required so much from me, it truly helped me get through the many months of isolation. He is still a very rambunctious pup and helps me to get out of the house for the many needed puppy walks, which I know would not happen if I didn’t have him. 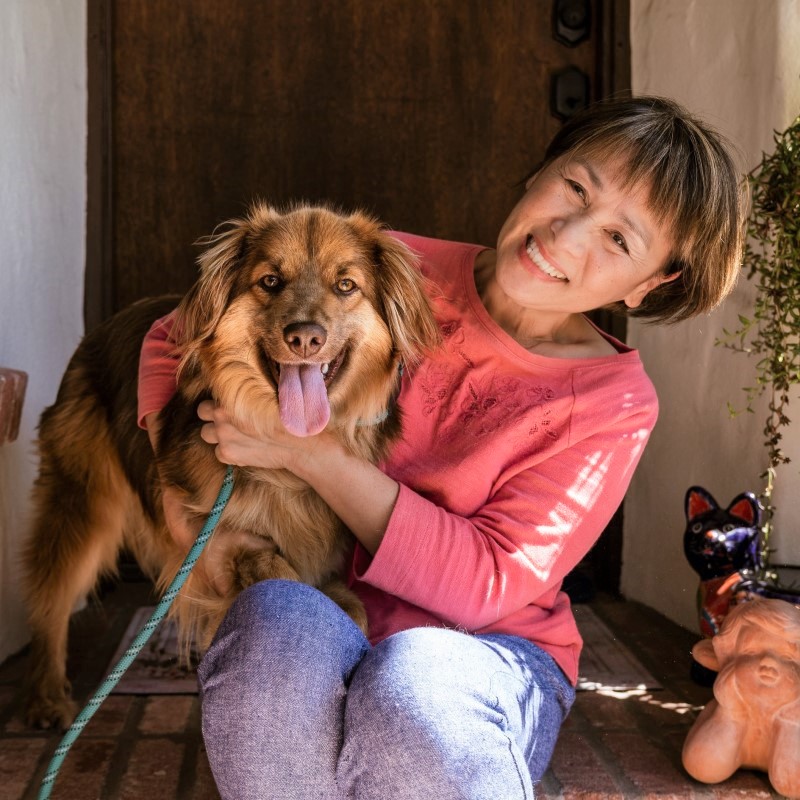 If you could change something to make the world better for animals, what would it be?

There are SO many things that I’d love to change to make the world better for animals. Because I’ve spent so many years doing TNR and managed community cat colonies, I really wish we could have a way to better educate communities about spaying/neutering and about community cats.

In the years that I’ve done this work, I have had more heartaches than joy because TNR work is simply not the same as fostering adorable and cuddly kittens. There are so many misconceptions about community cats and the incredible efforts it takes to humanely manage the population of these cats. I used to feel despair because the work was simply never done, but my colonies were the very reasons that I kept doing the work. Rain or shine, they always waited for the sound of my car, and the joy that they showed when I came into the feeding stations is irreplaceable.

We’re so grateful to Chris for her amazing work as a San Diego Humane Society foster — most often taking large litters of kittens and their mothers and helping them get ready for new homes!

Learn more about fostering with us at: sdhumane.org/foster