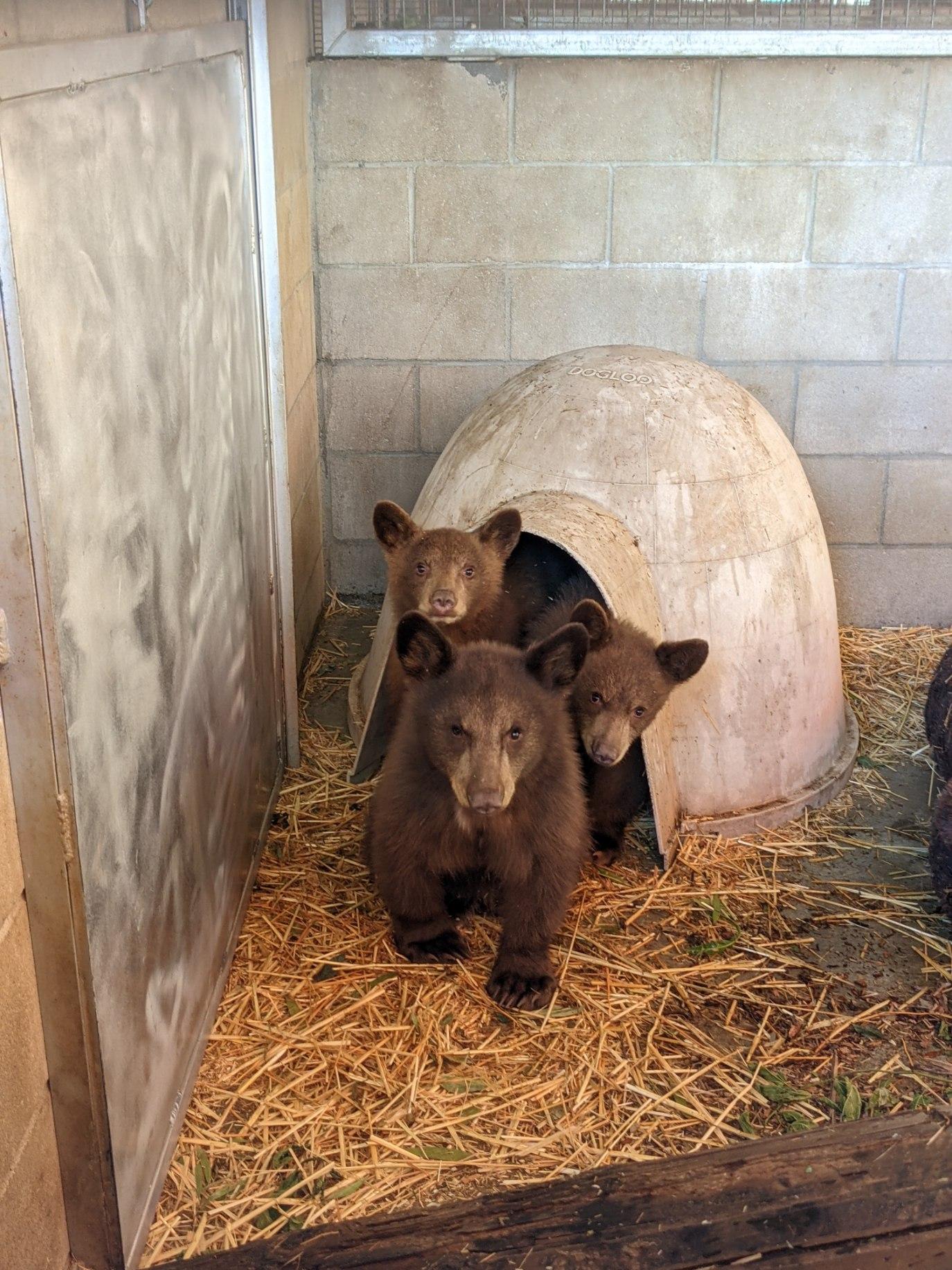 RAMONA, CA — The three orphaned California black bear cubs, transferred to San Diego Humane Society’s Ramona Wildlife Center for rehabilitation about a month ago, have passed their health exam and have been housed together to grow strong until they are ready for the wild. The cubs are playing together, investigating their habitat and learning to forage for food.

Two of the cubs, a brother and sister, came from Valley of Falls in the San Bernardino Mountains, and the third from Lake Arrowhead. The bears all arrived on separate dates, after being rescued by the California Department of Fish and Wildlife (CDFW).

The first two siblings are now about 6 months old. They became orphaned after their mother, who was conditioned to seek food from humans, was killed by a civilian while attempting to break into a cabin in Valley of the Falls. The first cub arrived at the Ramona Wildlife Center on July 9, and the second on July 12.
The third unrelated cub, who is female, arrived on July 15. That cub’s mother is believed to have been hit by a car near Lake Arrowhead.

San Diego Humane Society’s Project Wildlife team kept the cubs separate for 48 hours, before placing them together in a suitable indoor/outdoor enclosure. “The single female cub, who is actually much bigger than the two siblings, was rather shy and quiet in the beginning,” said Dr. Jon Enyart, Senior Director of Project Wildlife. “It took some time for the brother and sister to invite her into their family, but now they do everything together.”

On Aug. 4, 2022, San Diego Humane Society’s Project Wildlife veterinary team anesthetized all three bears for their first physical exam, which included blood work, radiographs of every limb and portion of the body, a check of their teeth, as well as measuring their paw pads, body length and width. The bears were also microchipped. The veterinary team was pleased to find all three bears in excellent health. After they woke up, the bear cubs were moved to a full outside enclosure for the first time.

The move outdoors is significant in the cubs’ preparation to return to the wild, because they are given access to trees, shrubs and natural substrate. They also get acclimated to the weather, and have opportunities to run, climb, play and forage for their food. “It is so important that these bears do not get comfortable around humans and associate us people with food,” said Andy Blue, campus director of San Diego Humane Society’s Ramona Wildlife Center. “For their own safety and the safety of the public, we want them to avoid humans at all cost, and learn how to forage and hunt so that they can survive on their own in the wild.”